In 1952, Kalamazoo Township (Kalamazoo Co.) was involved in an annexation battle with the City of Kalamazoo. During that time, Kalamazoo Township Clerk Joe Parisi and other township officials began pondering the foundation of an organization to provide information to townships, as well as impact legislation at the state Capitol.

Parisi spent most of the next year traveling around the state, meeting with township officials, and receiving advice and recommendations about the formation of a Michigan organization for townships. After the trip concluded, the supervisors and clerks of all 16 townships in Kalamazoo County and supervisors from Allegan, Berrien, Calhoun and St. Joseph counties met at the Kalamazoo Township hall. Following much discussion the group decided they would support the effort to organize statewide.

As word of the new organization spread, Parisi began meeting with local and state government officials who agreed to attend a meeting on October 6, 1953, to formally organize the townships association. More than 700 township officials gathered in Lansing to be addressed by Parisi in the main ballroom of the former Olds Hotel, where the group voted unanimously to form the association. At the meeting’s conclusion, Redford Township (Wayne Co.) Supervisor Leonard Broquet was elected president, and Governor G. Mennen Williams offered his congratulations and best wishes for the future of the newly formed Michigan Townships Association (MTA).

With Parisi at the helm, MTA began growing its membership, supported by dues at $5 for small townships and $10 for large townships. By January 1954, 600 of the Michigan’s then 1,268 townships had joined the Association. In an effort to garner more support from individual townships, Parisi and Harry Francis Smith, attorney for the Association, developed MTA’s first legislative policy agenda, with the goals of gaining additional powers to enact more ordinances, seek relief from annexations and create special assessment districts.

The Association accomplished its first legislative success in 1954 with the Legislature’s approval of a new special assessment law that provided townships authority to finance improvements. Additional new laws favorable to townships followed at a rate of 15 to 20 per year. With these successes, membership began to increase.

During the organization of the Association, Parisi continued to serve as both Kalamazoo Township clerk and executive director of MTA, conducting Association business from his office in the township hall. In May 1957, Parisi decided not to seek re-election as township clerk and began serving as MTA executive director on a full-time basis. It was at this time the MTA office moved to Lansing.

In 1959, an effort spearheaded by George Romney, then president of the American Motor Car Company, emerged to hold a Constitutional Convention. Among the goals of the “Con-Con” were to update the 1908 state constitution, create a unicameral legislature, and decrease the number of units of government below the state, with the last being the most frightening to local units of government.

In February 1962, the Committee on Local Government intensified their discussions on the future of township government. On February 13, the Committee of the Whole met solely to discuss the future of townships. A vote was taken later that spring on an amendment to dissolve townships, which lost 88 votes to 41. Michigan’s new constitution was adopted by less than 8,000 votes out of the several million cast and took effect January 1, 1964.

Just as township government in Michigan was affirmed, a movement began on the national front to organize an association to represent township government in Washington, D.C. In November 1963, the National Association of Towns and Townships (NATaT) formally organized with the avowed purpose “to strengthen and sustain enthusiasm of the entire nation for local government at the town or township level.” Parisi was elected its first president.

During the mid-1960s, MTA experienced a period of phenomenal growth. Because of its achievements in strengthening township government, the Association became more important to township officials and found itself in need of expanding its services. In addition to advocacy, the MTA began offering scheduled training classes and legal information services.

As MTA expanded, so too did its need for more office space. In the late 1960s, the Board of Directors began planning for the Association to have its own building. A colonial-style building was erected at 3121 W. Saginaw in Lansing Charter Township. More than 100 township officials and guests attended the dedication ceremony in October 1972, including Lieutenant Governor James H. Brickley, Supreme Court Justice G. Mennen Williams and Congressman Charles E. Chamberlain. Chamberlain presented a flag that had flown over the U.S. Capitol in Washington to MTA President Jack Millard. Together, Chamberlain, Millard and Parisi raised the flag to the top of the staff in front of the new building.

Changing of the guard

As District Meetings were drawing to a close in 1973, Parisi was stricken with a heart attack. In an effort to ensure the Association ran smoothly in spite of the executive director’s absence, Robert R. Robinson, the MTA’s legislative director, and the Board of Directors assumed leadership. Eventually, Robinson, a former MTA President and supervisor of Meridian Township (Ingham County), was named MTA’s second executive director.

Robinson focused the organization’s legislative efforts on providing greater boundary protection for Michigan’s charter townships, promoting revenue sharing at the state and federal level, ensuring township eligibility for state and federal grant and aid programs and enhancing the overall reputation and image of township government as an efficient and effective servant to the public. The post-Parisi era is also a period of development for the MTA Board of Directors, which greatly expanded its oversight role of Association programs, services and finances.

La Rose’s tenure as executive director was notable for the expansion of MTA’s education programs and the development of a staff that reflected a mixture of township government experience and academic training. During almost two decades as MTA executive director, La Rose also led NATaT and the National Center for Small Communities.

In 1987, the MTA Board approved the purchase of a new office site on almost 10 wooded acres in Delta Charter Township. Due to careful financial planning, the new site and building had a minimal impact on MTA membership contributions. MTA won an Award of Excellence from the American Society of Association Executives for its financial planning for the new headquarters.

In an effort to alleviate cramped working conditions, the new building was designed to enhance coordination and productivity while combining elements of modern and Americana architecture. A 78-foot-long wooden bridge, purchased from South Dakota, was installed and continues to greet visitors as the approach to the building from Westshire Drive.

Working to keep townships the ‘Government of Choice’

Upon La Rose’s retirement in 2000, G. Larry Merrill became MTA’s fourth executive director. He served as deputy executive director since 1985, but was originally hired in 1980 as director of education. Merrill’s focus was to support the efforts of the MTA board to govern at a strategic, forward-thinking level. In 2019, Neil Sheridan became the fifth executive director in MTA history.

Implementation of the board’s Strategic Governance Plan has resulted in a deliberate and nuanced legislative strategy which recognizes that Michigan’s economic changes necessitates an evolving role for township government that includes collaboration, cooperation and regional policy perspectives. The Board also adopted a number of reforms to make itself more effective, including reducing its size, reapportioning its districts for proportional representation, and ensuring greater accountability to the Association’s members. 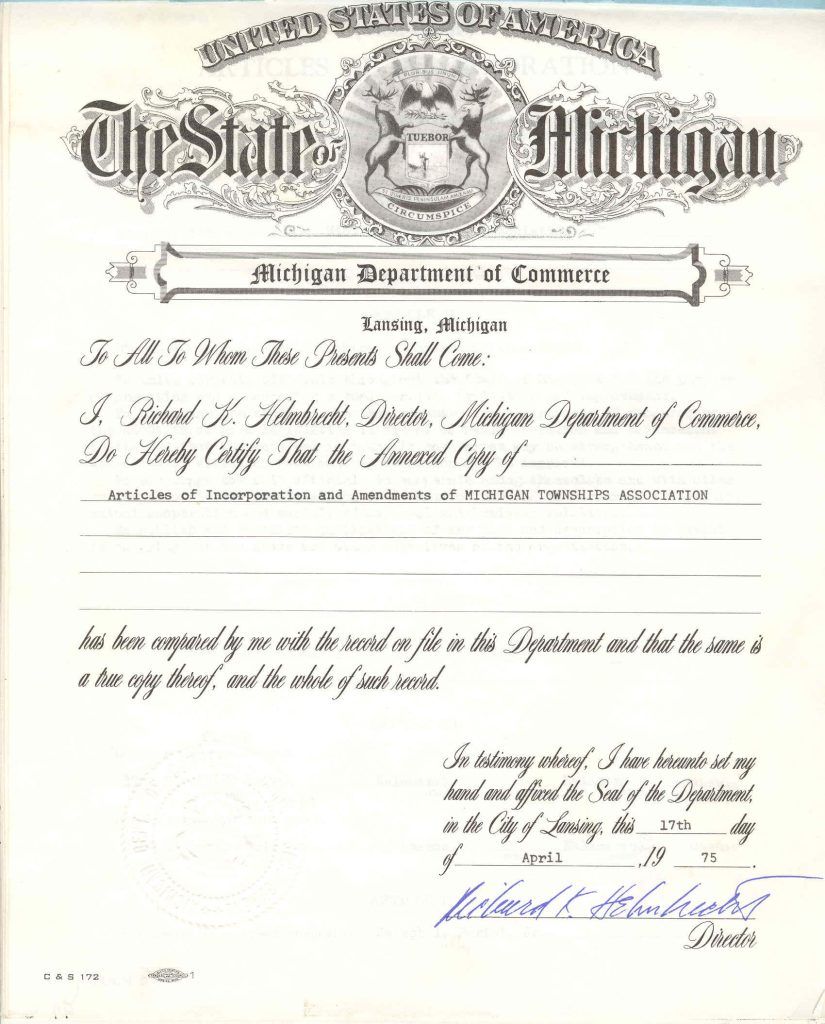 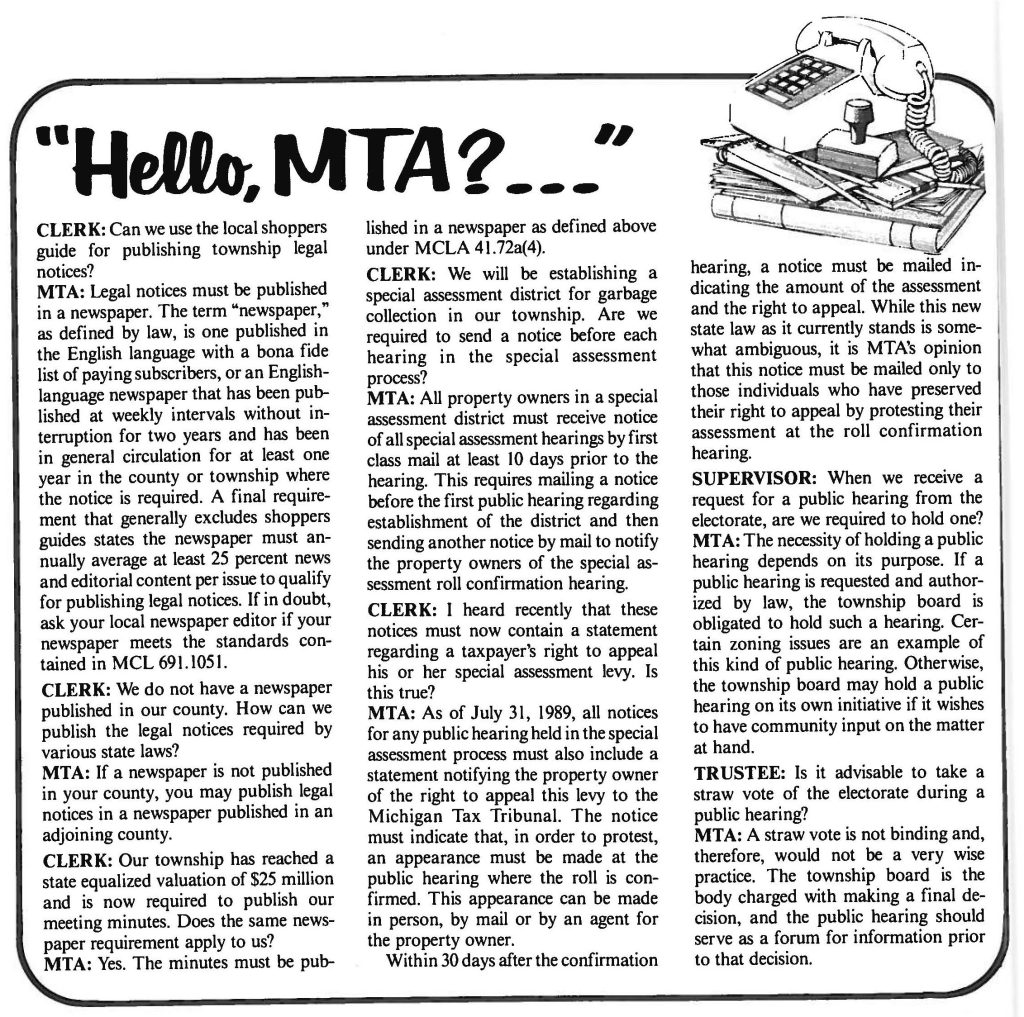 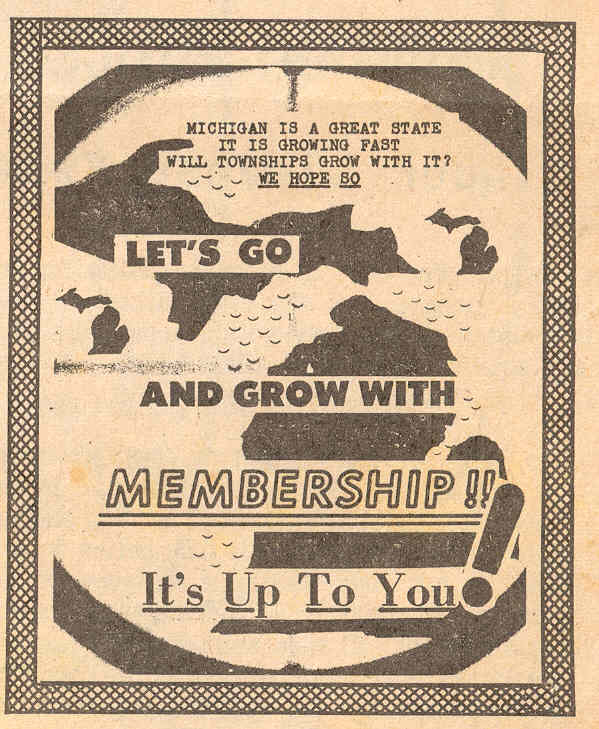